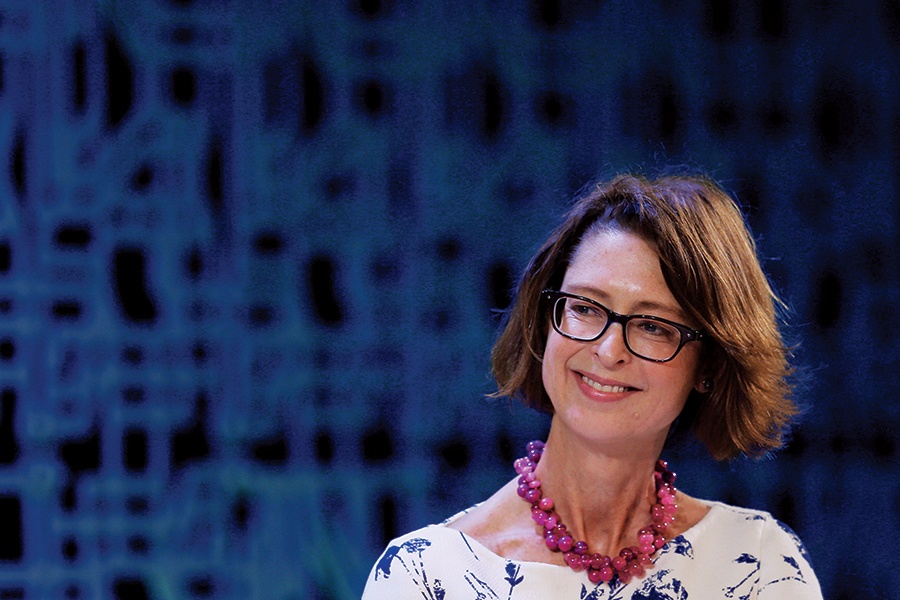 FinTech Magazine takes a look at Forbes’ ‘The World’s 100 Most Powerful Women’  ranking to compile a list of the top ten women in the fintech sector.

The 27th most powerful woman in the world, according to Forbes, Stacey Cunningham historically became the first female president of the New York Stock Exchange in 2018. She worked on the NYSE trading floor for a decade before leaving out of frustration at the lack of technological integration. Her goal on returning was to modernise. With a degree from Lehigh University in industrial engineering, she helped to  roll out the NYSE Pillar, a purpose-built, state-of-the-art trading platform.

Ruth Porat has been the CFO of Alphabet, a Google holding company that oversees 98,771 employees, since 2015, according to Bloomberg. Forbes rates her as the 21st most powerful woman in the world. In a recent investor report, Porat pointed out how the firm’s video platform, YouTube, was the second-biggest contributor towards revenue growth. A socially-conscientious leader, she participated in the Google Walkout for Real Change, a protest against sexual harassment in the workplace.

Ho Ching is the CEO of Temasek Holdings, an investment company owned by the Singaporean government. Rated as the 17th most powerful woman in the world, she has been involved with Temasek for 16 years. According to China Daily, in 2018, half of Temasek’s $21bn investments went into fintech companies such as Policybazaar, Ant Financial, CashShield, and Go-Jek. During her tenure, Ching has helped grow Temasek’s portfolio to over $235bn, according to Forbes.

With a B.A. in Political Science from Williams College and an MBA from the Owen Graduate School of Management, Adena Freidman is the CEO and president of American stock exchange, Nasdaq. Forbes ranks her as the 16th most powerful woman in the world. At Nasdaq, Friedman has undertaken several roles, including CFO and COO. Under Friedman, Nasdaq is considering cryptocurrency, with plans to add bitcoin to its platform sometime this year.

Working at Oracle since 1999, Safra Catz has been the co-CEO of the software firm since 2014. According to Forbes, with a net worth of approximately $985.4mn, Catz is the 14th most powerful woman in the world. Catz has been credited with leading the company’s aggressive acquisition strategy that saw it spend over $60bn on over 130 buyouts since 2005. Oracle uses cloud technology in its Digital Innovation Platform to provide open-API services to fintechs and banks.

Until earlier this year, Angela Ahrendts worked as the Senior Vice President of Retail at Apple, heading the firm’s online and physical stores. Forbes rates her as the 13th most powerful woman in the world. With an unconventional background in fashion, Ahrendts served as the CEO of Burberry for eight years before joining the technology company. Eventually, she became the highest-paid executive at Apple, with a salary of $24.2mn in 2017, according to Business Insider.

The 11th most powerful woman in the world, according to Forbes, Sheryl Sandberg has a net worth of $1.7bn. Working as the COO of Facebook since 2008, she helped the company pivot from a $56mn loss to a $22.1bn profit in 2018, according to Forbes reports. Under Sandberg, Facebook now has over 30,000 people dedicated to safety and security and the company’s stock is up. She places 10th on Fortune's ‘10 Most Powerful Women’ ranking.

An alumnus of Bryn Mawn College and Harvard University, Spanish Ana Patricia Botín has been chair of Banco Santander since 2014. Forbes names her the 8th most powerful woman in the world. Fluent in five languages, she has a long history of investing in the power of the Internet and fintech, connecting with people such as Ana María Llopis, founder of OpenBank. Santander InnoVentures has set aside $100mn to fund disruptive fintech innovation.

Beginning as Google’s 16th employee in 1999, Susan Wojcicki is currently the CEO of Youtube. According to Forbes, she is the 7th most powerful woman in the world. With a bachelor’s degree in Literature and History from Harvard, as well as an MA in economics from UC Santa Cruz and an MBA from UCLA, she was responsible for the $1.65bn purchase of Youtube by Google in 2006. Forbes places the current value of Youtube at approximately $90bn.

Named as the most powerful woman in finance by American Banker and Boston Magazine, Abigail Johnson is the 5th most powerful woman in the world, according to Forbes. With a net worth of $15.8bn, according to Forbes, she has been the CEO of Fidelity Investments since 2014. Modern-minded, Johnson turned Fidelity into one of the few American finance firms to engage with cryptocurrencies, launching a platform in 2018 that allows institutional investors to trade bitcoin and ether.